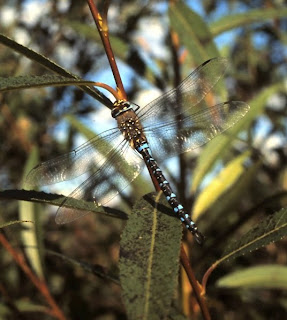 On the edges of old maps – especially those used in works of fiction – can be found the phrase “here be dragons”. While this could be taken to mean that there are real dragons to the east, west or whatever, the real meaning is “beyond here is mystery”. If you sail into the realm of dragons you really are in uncharted waters.

Dragonflies represent uncharted territory for me, swimming in uncharted waters as it were. Yet this week I have been surrounded by them, flying up from sunny patches on the lawn, perching on warm rocks and hunting the edges of the bushes. Even as a kid I watched them, often whilst fishing, catching insects in their basketed legs. Sometimes I caught them is large fishing nets, but only sometimes, for they could normally out fly the waving of a clumsy landing net. I don’t suppose you survive as an aerial predator for millions of years if you can’t fly a bit.

Any move to a new country requires some adjustment, and Dragonflies in Australia are a far more daunting prospect than in the UK. First there is the sheer number

of species – 50 or more species in the UK, over 300 in Australia. But there are also things that need to be “un-learned” – the split between Damselflies and Dragonflies in the UK was simple enough, being based on the way the adults held their wings. So at least you had a start. In Australia this does not hold true – the difference between the two groups being based on wing morphology, which is not always easy to spot when the insects are actually using their wings for their proper purpose – ie flying!
I spent a largely fruitless hour trying to photograph the smaller red dragonflies that are now common in my garden – maybe 10 or more at any one time, while I did not even try to catch the larger ones hawking at head height and above. One may as well try and photograph sun beams as these insects. However, the small reds did like to sit in the sun and warm up

(they are dragons after all!) and I was able to get some success here. The next day was colder, and in the early morning I found a chilled dragon resting on the path outside the kitchen door. The dragonfly was not fully warmed up and neither was I, but the pictures are better than nothing. The image at the top of the page is from NW England – showing that at times these animals do cooperate. I thought that is was a Common Hawker, but confidence was misplaced here. It is actually a Migrant Hawker, which has become more common in NW England (and especailly in Lancashire where the image was takesn) over the last 10 years. Interestingly it is the first conformed sighting for this sepcies at Leighton Moss (the RSBP Reserve), which is very nice!

One of the things I most like about having dragonflies in my garden (apart from the fact that they eat mosquitoes!) is that they are recognizably ancient: successful in the past and successful now, fully modern version of the insects that hunted 300 million years ago. On that scale spending an hour watching and photographing them does not seem such a big deal!
Posted by Stewart M at Saturday, September 19, 2009

It seems that its not only dragon flies moving North. See this link for the expansion of Hornets - large bee killing wasps - into France and possibly the UK.