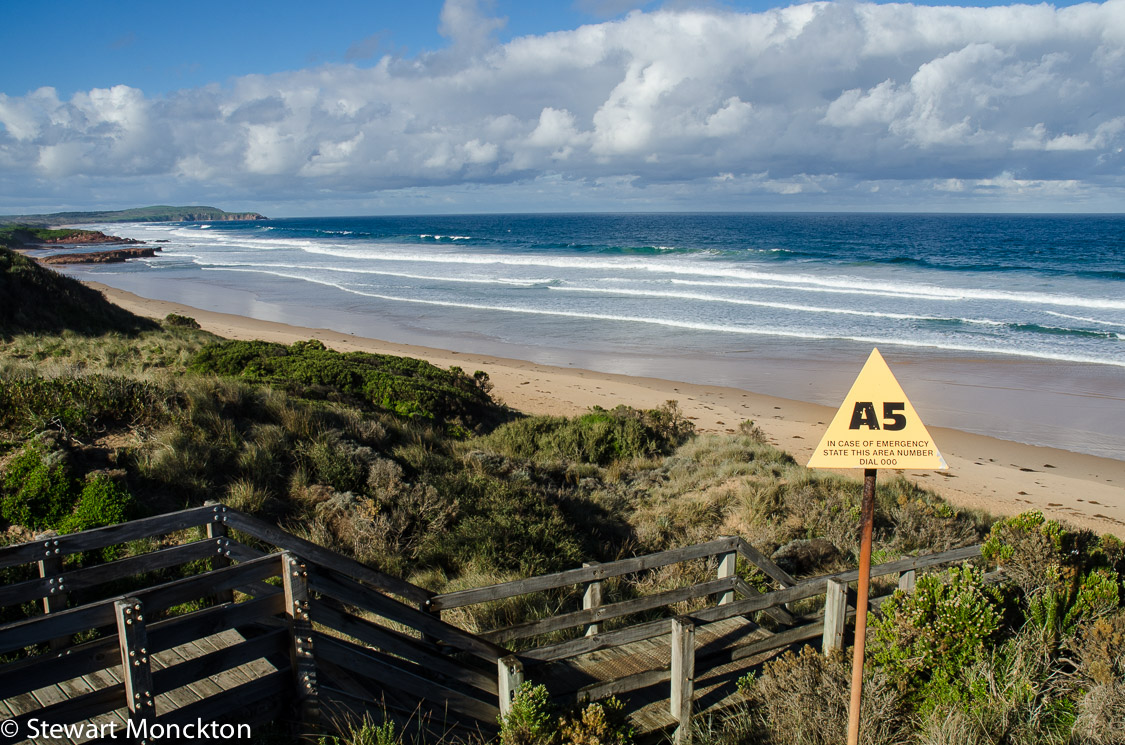 You could tell it was going to rain.

You could smell it in the musty dankness lifting from the soil.

You could feel it in the heavy touch of the wind, fast and strong, around the hedges and rough pruned street trees.

You could see it in the green tint edges of the clouds above, sealing in the sky, shutting out the early evening stars.

As I reversed the car out and away from the house, the first heavy drops began to fall. By the time I stopped at the third set of lights it had become heavy.  Real rain.  Winter rain.

All around me the world was full of mirrors; water sheened surfaces reflecting the light.  Shop lights on the pavement, broken by passing figures.  Car headlights on the road.  The on off flash of my indicator in the paint sheen of the car in front.

Waiting at the pedestrian crossing a man balanced a stack of pizza boxes in one hand and held a wine bottle in the other.  He kept his head down, shaking the rain from his eyes.  The passenger door of the car in front of me opened and a young woman stepped out, slammed the door in obvious anger, and walked away.  It may have just been the rain, but she seemed to be crying.  Pizza man does not even look up.  Cars scatter as an ambulance weaves its way through the traffic.  Flashing lights and reflected sounds.  Loud and unnerving, the ambulance passes.  Somebody’s day is far, far worse than mine. Pizza man walks across the road. The young woman is nowhere to be seen.  The heavy rain kicks up off the road in crater bursts.  I turn left.

The next set of lights proves less eventful.

On the freeway the rain seems heavier.  Truck spray.  Car spray.  The tic toc swish of the windscreen wipers.  The rumble of tyres over the changing road surfaces.  Rain driving.  Night Driving.

The shapes of the buildings by the road blur, hard edges become soft.  Bright colours become dull.  A Scottish voice sings, and I join in to pass the time.  I would rather not be night driving in the rain.

By the time I reach Phillip Island I am hungry and ready to sleep.  I find something that passes for food and head to bed.  Gulls call in the distance and water drips outside the window.  Slowly the day fades.

Breakfast arrives quickly.  A simple plate of scrambled eggs, grilled tomatoes and toast.  Leaf tea from a pot.  Milk in a small white jug.  Nothing fancy, but it was all I needed.

The road up towards Churchill Island was closed, but I had a date with a guide at the bridge, marked with an X on a hand drawn map.  A car drove down the closed road and pulled up next to mine – I had found my guide, even if I was a few minutes late.

Back at the bridge we planned the morning, which I thought was a day.  First here, then there and finally back to here.  I didn’t really mind – I just wanted to be out and about with somebody who knew the lay of the land and the turn of a feather. 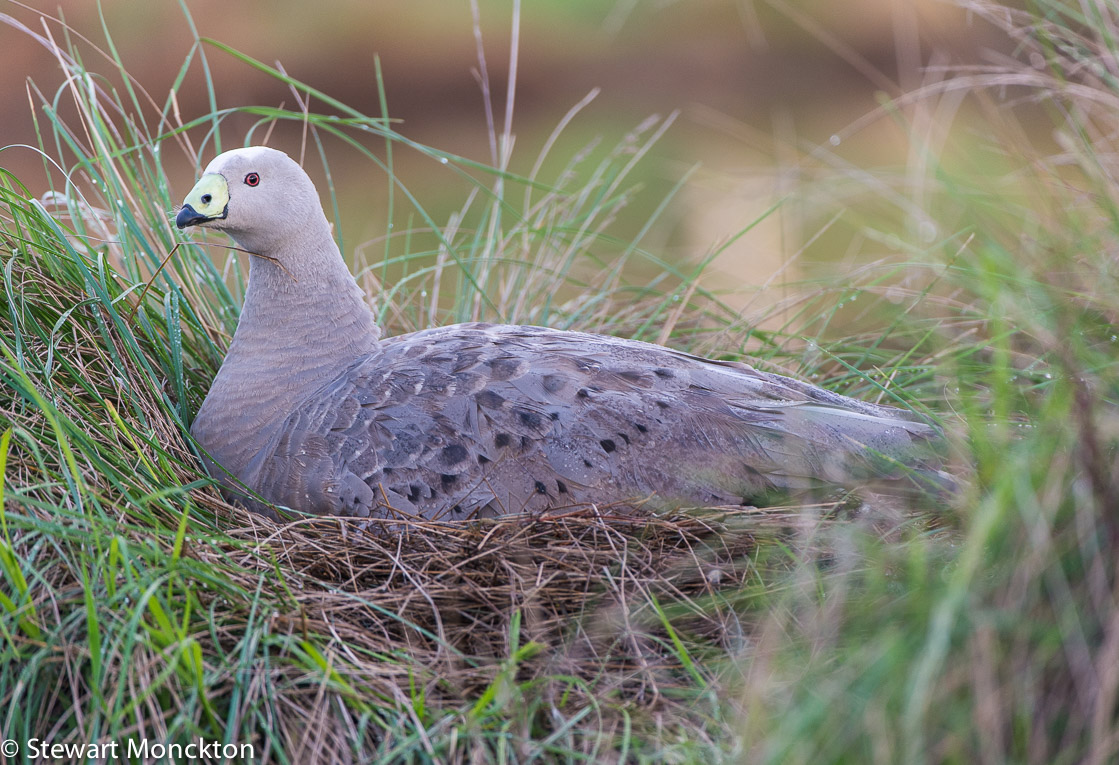 Every patch of short grass seemed to hold either a crowd of Purple Swamp Hens or a couple of Cape Barren geese.  The geese, grey with delightful darker dots, cropped down the grass until is was bowling green short.  Only the piles of half processed grass – fluid and rather unpleasant – restricted the playing of improvised games.   Males and females of this, one of the world’s rarer geese, are hard to split but for one thing.  The female – domestic goddess that she is – tends the nest with its cargo of eggs, while the male – all patriarchal disdain and stiff upper neck – walks the boundaries and sees off intruders.  The fact that they seem to be the perfect size for the table may account for their rarity.  Only recently have their numbers begun to recover.  Only recently has the fall of the feathers across their back, and the splatter of dark spots on their wings, been considered better than the taste of their meat.  This seems to be a good thing. 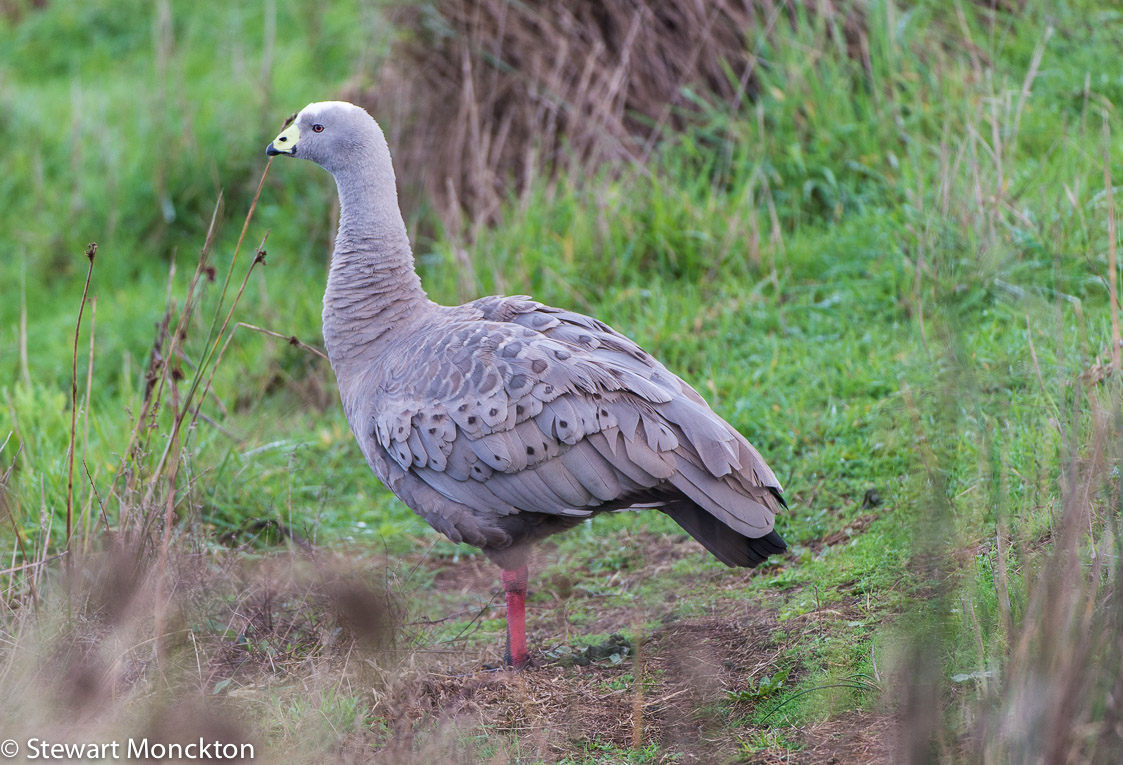 After a brief drive along largely empty roads we arrive at the koala centre – an area of old gum trees and safe protected grasslands.  A space in which koalas can do what comes naturally without the interruption of dogs or men with chain saws.  While these charming animals are so, so watchable, it’s birds I have come to see.  In the slightly de-leafed crowns of the trees honey-eaters and wattle birds call and fly.  A family party of Kookaburras gather and laugh on a sunlit branch.  On the leafy floor Superb Fairy Wrens search for food and keep an eye on each other.  A party that argues and squabbles like most human families, the male bright blue, the females and youngsters dull shades of grey and brown.  Evolution has chosen display for one and the practicality of camouflage for the others.  I laugh at the reversal – my wife wears the bright colours, and I think that blue is flamboyant, and choose green if possible. 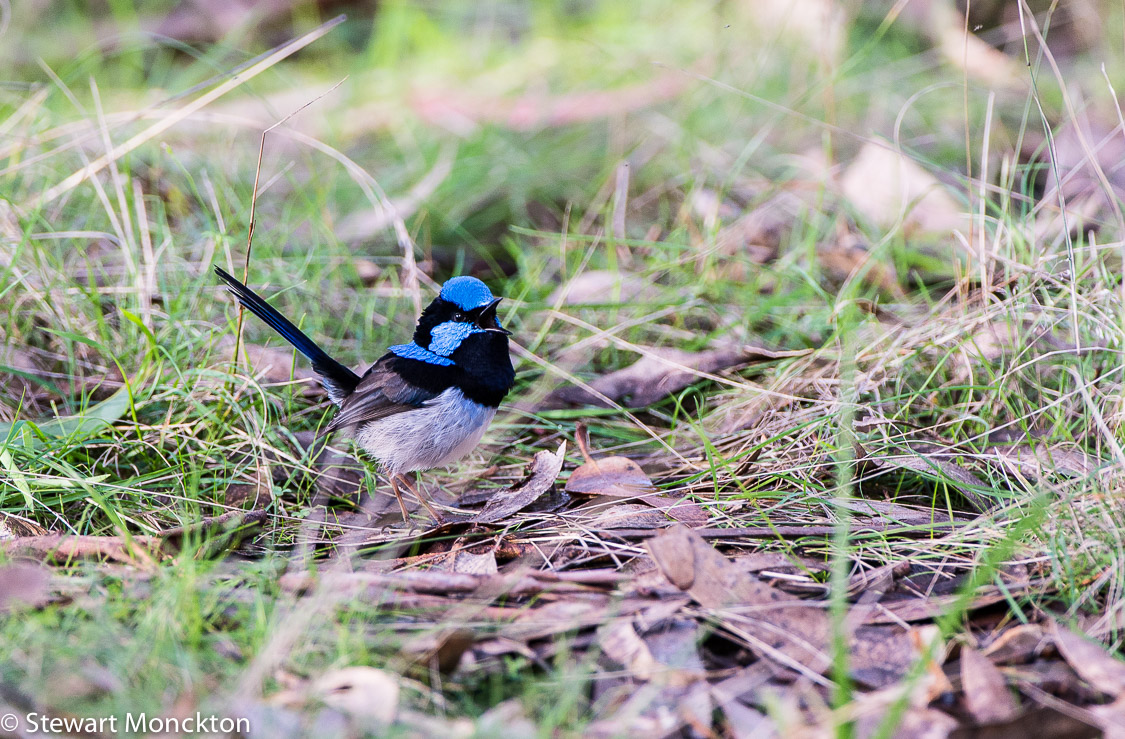 In the lower branches a thickset bird sets its beak to finding food – seeds maybe, insects, anything but leaves.  With a colour scheme of yellow, white and black it’s distinctive enough to be named even with a glance – it’s a Crested Shrike Tit.  With a heavy bill and a muscular looking demeanour it’s clear that this is a powerful bird.  The male – all bright colours once more – seems far bolder than the female and flickers through the lower branches, giving wonderful views and drawing comments of appreciation.  The female rustles in the background, higher in the trees and more hidden for view.  According to the guide books, this bird is locally common – which must mean I have been looking in the wrong locations. 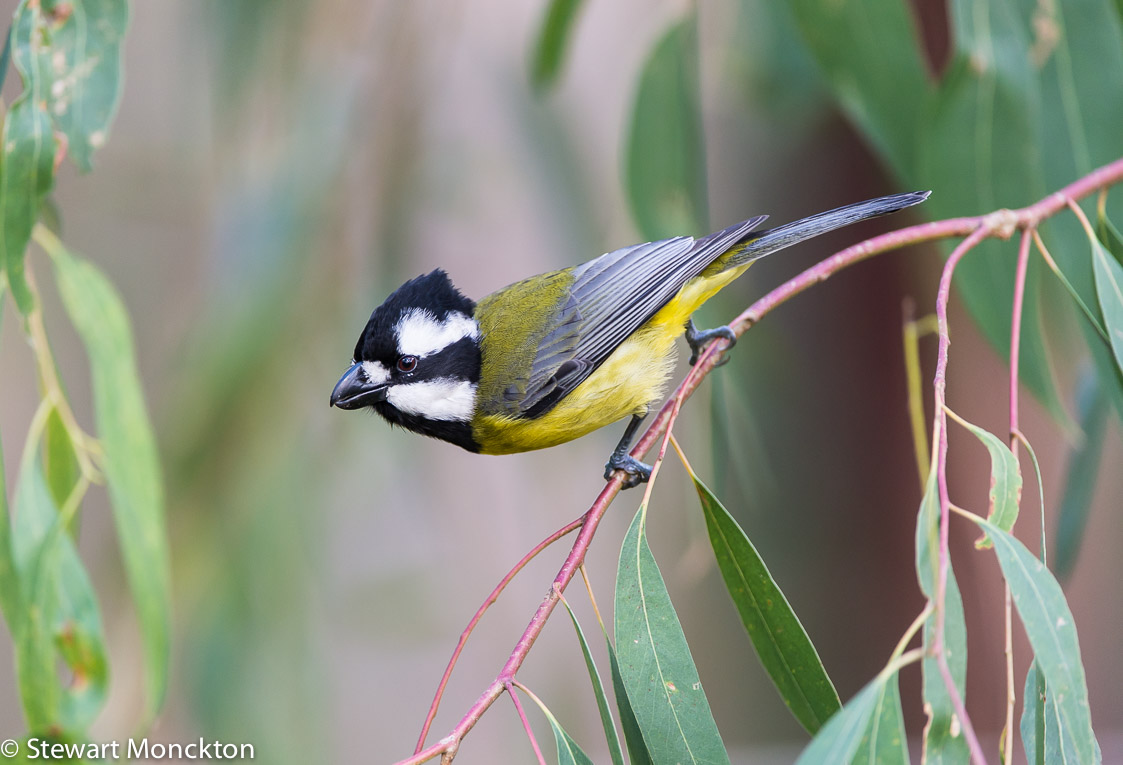 In a natural pool, set between the joints of two high branches, Rainbow Lorikeets wash with splashy wing beats.  High in a nearby tree  Galahs  sit and watch the watchers go by.  Open spaces in the canopy illuminate bright patches on the woodland floor.  Dark and light.  Green and grey. Sun warmth and slight shadow chill.

Back in the cars we head towards the coast.  On the sand, Hooded Plovers run in the distance, backwards and forwards with the waves, clockwork, wound by the fetch of the wind and the breaking of the water.  Ravens and Oystercatchers form patches of darkness, some on the rocks, some on the sand.  Gulls ride the waves on silver wings.  The wind smells of salt and seaweed, cast up on the beach by last night’s high tide.  I watch the open sea for a chance of albatross, or seals, or whales.  Chance passes by.

Waves break to form caves and rough-cut headlands around a series of small islands called the Nobbies.  They look, according to local legend, like the islands of the same name in Scotland.  This may be true; but I cannot tell.  When large waves rush into a cave the air inside is compressed, pushed together to form a force that, when released, sends a spray of foam and mist into the air.  It’s a blowhole and it looks like the sea and the rocks are breathing in and out.  Deep breaths of sea air, fresh from the Southern Ocean.

Where soil remains on the steep cliffs there are tunnels and holes.  Some are old and overgrown, some look fresh trodden and open. In the places where the soil has been lost, ripped away through the lack of plants and passage of damaging machinery, small wooden boxes, complete with neat rectangular open doors, replace the holes.  From a few of the openings black and white faces meet the light.  One face shakes from side to side, a beak flick of tiredness or maybe irritation.  For all their comedy appeal penguins are as inscrutable as the next bird – and Fairy or Blue Penguins are no exception.

But these penguins have little to be irritated about – the Summerlands Peninsula where they live is as close to penguin heaven as you get in Australia.  This is a piece of land bought years ago with the sole purpose of giving penguins peace on Earth.  In the past there were far more colonies around the coast of Phillip Island – maybe ten or more - but one by one they were lost to dog and cats, cars and houses, so that only one was left.  Without action the penguins of Phillip Island were doomed. 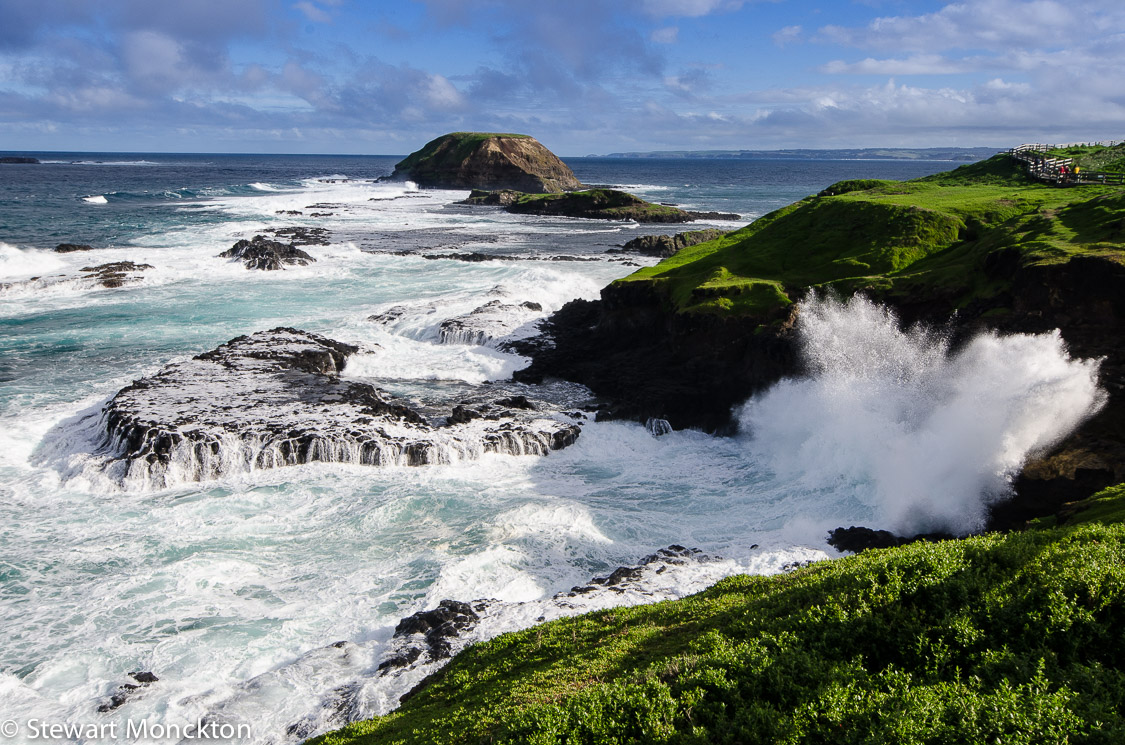 But then something strange happened – a government took a farsighted and expensive decision to protect the last penguin colony. To favour the birds over the developers and the homeowners.  The land where they lived, and the land around it was bought and managed for the penguins. This decision may have been driven by economics as much as ecology, for the penguins are central to the island’s tourist trade.  But whatever the motivation, the outcome has been good for the birds; their numbers have recovered, and they are (at least for the moment) safe.  Under these circumstances you would have thought that they would at least pop out from their holes for me to see them.

But, sadly, not.  A daytime penguin is a home-body, safe and sound underground.

But what seems sadder still is the realisation that today, our politicians would probably just let the penguins die and claim they were victims of market forces or the poor management of the last government.

Waves pound heavy on the shore.  Thoughts weigh heavy on my mind.  Deep in their sheltered burrows the penguins sleep the sleep of the protected, and knowing this lifts my spirits.

I end where I began, by a bridge from an island to another – from Phillip to Churchill.  Pelicans roost in a huddled group.  Black Winged Stilts stab and forage in the shallow waters.  A White-faced heron waits and waits by the water’s edge.  A peregrine flashes overhead, spreading a wave of consternation.

Politics be damned, while there is wildness there is still hope.

The peregrine returns as I depart.

It has been a fine morning. 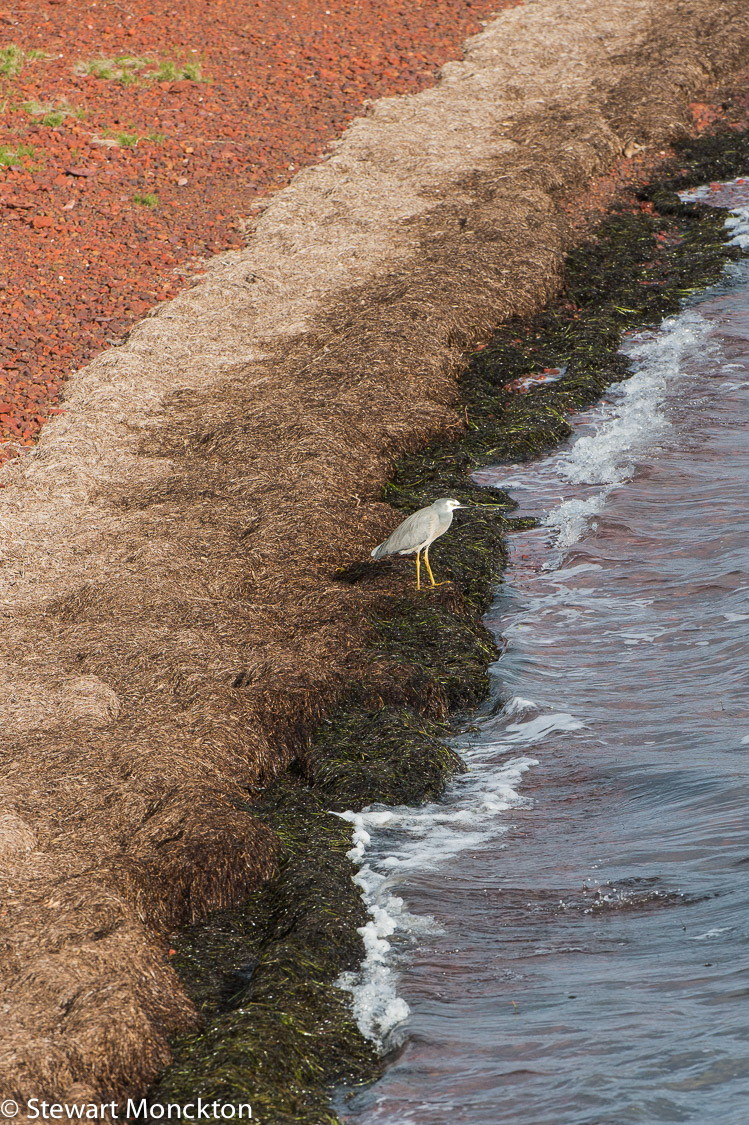