Public transport is an eavesdropper’s paradise.  Disconnected conversations float along train platforms and down the aisle of trams; past coffee hungry commuters and seat searching straphangers.  Some are fragments of conversations between two present people, some are one sided fragments shouted into smartphones.

“Where are you? You said you would be here by eight.”

“Well, that’s a real shame, but you said you would be here by eight!”

I look at my watch.  It’s a minute past eight.

“I hate this new weather app.”

We live in uncertain times. 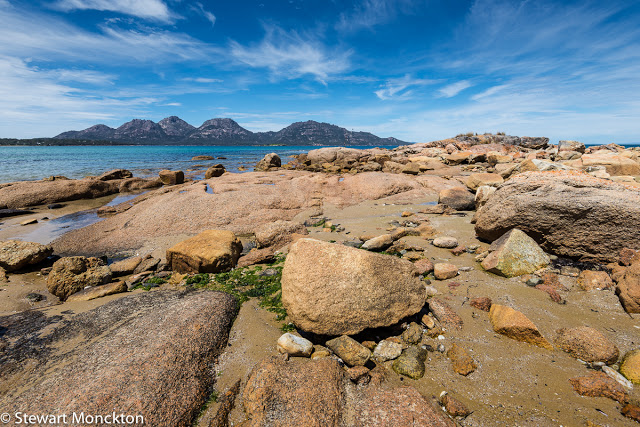 At low tide a strip of rocks bends from the shore, away from the beach and out towards deeper water.  In places the rocks are slick with weed, in others rough with barnacles and mussels.  A pair of oystercatchers works the wave-line, happy to keep some water between them and me.

This is fishing at it’s simplest. Rod and reel. Hook and line.  No modern sophistication or complexity.  The bait provides the weight, and flickers silver as it drifts down through the water. I lift the rod tip and quickly bring the bait back to the surface, from where it starts to fall again.  The line is plucked from my fingers and I have a fish. Sometimes it is as simple as this. The fish is a wrasse, unpopular in many minds, but robust in its protest; slow and powerful.  I slip a net under the fish, remove the hook and set it back on its way.  Within a few minutes this happens again, but this time the fish protests in a different fashion.  Fast movements, with headshakes and splashy surface action.  It’s an Australian Salmon, named from its streamlined shape rather than taxonomy.  Some people say they make good fish cakes, but this one goes free from the inverted net with a powerful tail flick.  Two more wrasse follow, but then something different happens.  A different kind of bite, a different kind of fight.  A flathead – perfectly named – comes to shore. This is a wonderful eating fish, the flesh light and sweet.  But as ever I let it go.  Catch and release is the way I started and it’s the way I choose to carry on.

In less than an hour I have caught half a dozen fish of three species.  All caught in the same way, on the same bait, from the same stretch of water. It’s a good start to the day and completely unexpected. These are wild fish on a wild and beautiful coast.  I don’t know what will come next; I don’t really know if there will be a next.  And all the better for that. 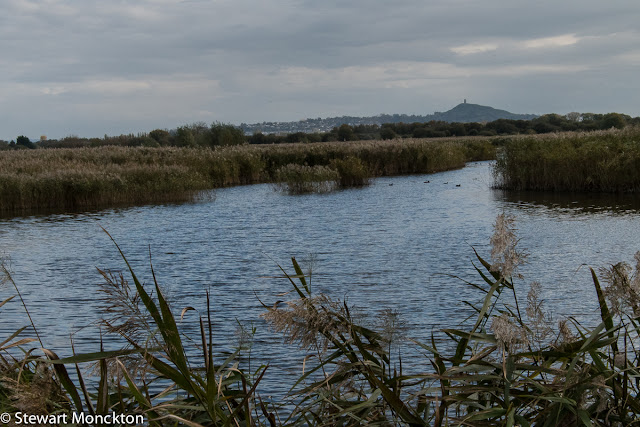 It’s dull and overcast, but mild.  The forecast speaks of heavy rain later in the day. Surprisingly heavy rain.  It’s probably a typical summer day in Somerset. The type of day that I have erased from my memory, so that childhood summers come back as long, warm and dry.

As we pull into the car park at Ham Wall, a few fat raindrops splash onto the windscreen. The rain has arrived early, but does not stay long.  Later in the afternoon it comes as predicted.

Jackdaws pick at the edges of the grassy banks which run down to the gravel car park. A pair of Mute Swans glide overhead to land on unseen water. Dragonflies flicker the contours of the vegetation’s edge with bright colours and fast wings.  Reed Buntings call in the background and Coots and Moorhens cackle in the distance.

When I was a kid, the noise of machinery and the mooing of dairy cows would have been added to this soundscape, as would have been a chorus of concern that these wetlands were dying.  The future of the Somerset Levels did not look healthy, there were too many conflicts and too few compromises.   Bitterns and otters were scarce to the point of extinction, Lapwings and Snipe – once common – were becoming rare.  Nobody really knew what was happening to the beetles and spiders.  Drainage and peat extraction were causing the Levels to dry out. As the water retreated, so did the wildlife.  And as the peaty soil dried, the fragile ecology and friable archaeology of the past turned to dust.  Ancient wooden tracks and buildings, which had been buried for thousands of years disappeared with frightening rapidity. A blanket of uniformity was smothering diversity. Birds and bees, orchids and otters were all in decline, taking shelter in scattered nature reserves and untouched corners.

My mother always called this area of the world ‘the Back Streets of Wells’ – which makes some sense, but not a lot.  The area, maybe even the whole county, centres on Glastonbury, with its ruined Abbey and famous Tor.  From this landscape of water mists and ruins, rises the myth of Arthur, the English King, who in the hour of the country’s need, will return.   A casual glance at the news would suggest he is long overdue, but a differing form of return, real and tangible, has come to the Levels.

For all the activity and life around the car park, these things are not why I am here. I like them, but I’m here for a different reason – I’m here to find a ghost.

Despite my mother’s best and frequent efforts, I am not superstitious: I don’t really believe in luck as a measurable quality that some people have in abundance and others lack.  But Bearded Tits really do push me towards this kind of belief.  I have arrived at places minutes after they disappeared, left minutes before they arrive and generally been told “they were here yesterday/ this morning / last night” so often that it becomes predictable (and to my ever supportive family, mildly amusing!).

There are Bearded Tits at Ham Wall in numbers as close to abundance as it ever gets. And their behaviour and habits are as close to predictable as it gets.  And (of course) I failed to see any.  A warden in the hide saw one when I was sat less than 10 feet away – he could have been in on the joke that the universe seems to play on me with this bird. But I doubt it.

By the time we left Ham Walls we had had really good views of a wide range of species – including Bitterns, which are genuinely ghost like in their ability to hide and appear. But no Bearded Tits.

And the question I ask is this: would I rather have had a poor view of this species, a glimpse that is technically a view, or a sighting, but nothing more than a shadow, or would I rather keep hoping and planning, knowing that nothing is certain, knowing that wild creatures are uncertain and that at some time in the future I’ll try again.

With luck, I’ll be back to try again in later in the year.  But nothing is certain. 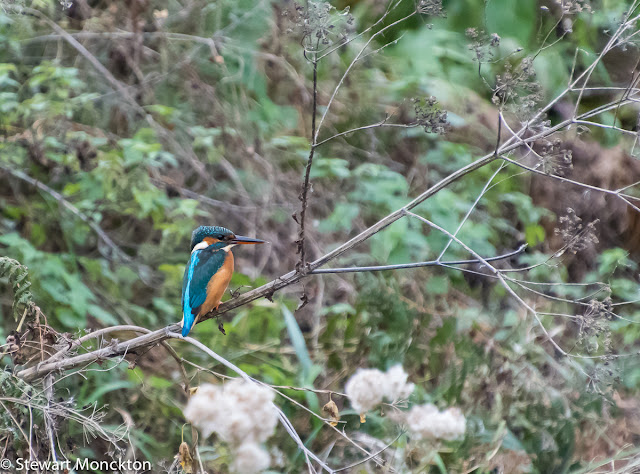 I’m teaching in a car park or layby of some sort.  There are piles of gravel at one end and desks at the other.  The gravel is between the desks and me. I only recognise one of the students.  An old dead tree hangs over the desks where the students are sitting.  Branches at odd angles, trunk bare of bark.   A large black bird flies towards the tree and I know two things with absolute certainty.  One, the bird is a Raven.  Two, that if that Raven alights on the tree, the tree will topple and fall onto the desks of the students.

The Raven lands.  The tree falls.  This is not good.  I know I must act.  I scramble through the gravel, which turns into a street, ruined by war or disaster. Tree roots and rubble hinder my feet.  I have to climb, as I cannot run.  There are children, dusty faced, looking to me for help.

By the time I reach the desks, the ambulance has come and gone, taking the students with it.  The mother of the student I recognise stands waiting, and asks why I took so long.  I have no answer.

For a few moments I am sure this is real.  But it’s not.  It’s just the product of sleep time neural connections, where part of my brain seems convinced I am still in England.

I am uncertain what this means.
-

A few months before we left for New Zealand the plates of the Earth shifted and the ground shook.  A swarm of earthquakes ripped along fault-lines, near the coastal town of Kaikoura. The town is famous for the wildlife, especially the whales, that are abundant there.  The earthquake centered on The Kekerengu Fault, which moved 10 meters, while dozens of other lines of weakness opened in the Earth.   In the space of two minutes, coastal Kaikoura moved 1 meter to the northeast and almost a meter into the air.  Geology more normally works in distances of millimetres and times spans of thousands of years.  Change like this is unexpected and profound.

The week before we went to New Zealand a huge swirl of hot dry air moved out of central Australia and drifted more or less west and south into the Tasman sea. Here, in the ocean between Australia and New Zealand it evaporated huge amounts of water.  The air, hot and dry when it left Australia, soon become cooler and much, much wetter.  The air was carrying the sea.

Such a volume of water cannot be held indefinitely by the air.  Eventually, when temperature or altitude intervenes, the water will have to be released. The ‘eventually’ occurred when the air and its oceanic load was forced up and over the southern alps of NZ.  The rain that poured from the sky was like nothing that had been seen in many, many years – maybe even ever.  It fell in torrents that washed away roads and pushed rivers from their normal course.  It fell and fell and fell.

And into this land of earthquakes and the rain I brought my family for a summer holiday.

We had planned to watch whales from Kaikoura, but the harbour was closed, elevated above sea level.  We had planned to travel over the Southern Alps – the spine of South Island – but landslides and floods closed the roads.

Geology and meteorology made a mockery of our closely planned trip.  We were forced to go elsewhere until the floods receded and the roads reopened.  The coincident timing of all of these events – earthquake, flood and holiday – was just that, a coincidence.  Maybe you can plan for the unexpected, but such preparation is so often unrewarded that it is neglected.  We expect things to go as planned. And when the cocoon of predictability is pierced by the natural processes of uncertainty, we feel robbed, rather than included in the Earth’s grand processes.  We admire the views of mountains and rivers, but seem upset when the very processes that form them stand on the toes of our plans.

The very act of planning seems to set in stone an expectation of the nature of the things that will be.  Uncertainty and its brother, change, are the handiwork of an uncertain world.

We would do well to listen, to observe and to act accordingly.

We live in uncertain times – we should make the most of them. 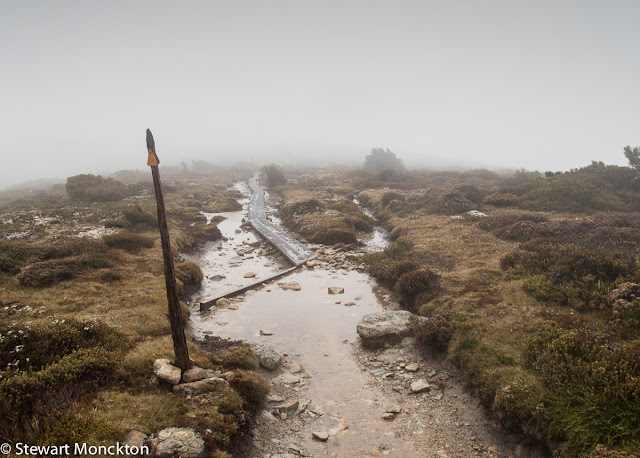