Showing posts from November, 2009
Show all

Not All That Glitters is Gulls! 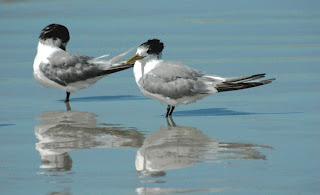 Loafing about at the water’s edge is a summer time ritual. Sand, sea air, the fear of sunburn and the cancer that is its bed-fellow. These are all part of a beach holiday. Waters edge loafing, cricket on the radio and over salted fish and chips form the holy trinity of the summer holiday. They restore fathers, sons and everyone’s spirits in a way nothing else does . A tonic in an age of stress. But sharing the water’s edge with you are birds that are normally over looked or mistaken for gulls or even worse, mistaken for seagulls! These fellow loafers are not gulls, far from it. In the flurry of beaks and legs and wings and squabbles that gulls bring, this is a forgivable oversight. But if you look you can often find something a little different, a little less predictable. Beyond the treasures that the tide can bring, cast offs, lost goods, mystery made real by the turning of the tide, you can find something that most people don’t see. That most people don’t notice. And you don’t alwa
Post a Comment
Read more

There's danger on the edge of town 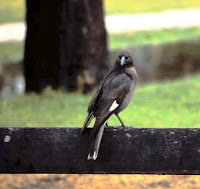 The suburbs are supposed to be safe. Each little house, filled with the perfect family, manicured gardens. Lawns lathered and shaved each Sunday, perfection imposed on a chaotic world. A little patch of order. Then the person next door turns out to be a mass murderer, strange midnight, torch light, diggings in the garden, a garage locked and bolted, a car parked outside it. “He seemed such a normal bloke” “He always said hello to me, most polite” “His roses were a credit to the neighbourhood”. But it’s not just the human world that is driven into a homicidal frenzy by suburbs; nature embraces the serial killer as well. Although in nature you have the saving grace of instinct rather than psychosis. Animal rather than antisocial. Real need rather than some other, darker, less palatable warp of reality. There are predators in the garden and they have young to feed. Gaping beaks, hungry mouths, empty stomachs. The evolutionary imperative, breed, survive, pass on those genes. The small fr
2 comments
Read more 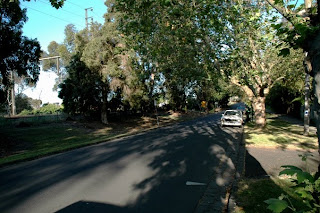 If you take a walk in a wood you see different plants and animals to when you are by the sea. Its common sense really. Unsurprisingly, sharks don’t do well in leaf- litter; it blocks up the gills slits. Nasty really, especially for the shark. Different habits have different features, so you get different wildlife. No surprise in this either. But the differences between the suburbs that surround my house do surprise. They seem to form different habitats, and often seen to hold different things to see. Not all that you see could be classed as wildlife mind you, but the point is still valid. Over the last week I have happened to have walked through three Melbourne suburbs at more or less the same time of day. Mont Albert, where I live, East Melbourne and Richmond. (That’s Richmond, Victoria, not Richmond, Virginia nor Richmond, North Yorkshire, just so we are clear about things!) I may as well have been walking through three different biomes, even though they are all within about 20 minu
1 comment
Read more

There and back (memories) 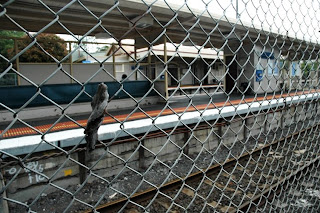 Monday, train there, walk back. Bag packed and ready, call goodbye and see you later. Opening the door to cool, damp bird song is one of the best ways to start the day. Leaving behind breakfast banter and bad puns, porridge, toast, tea, daily paper. The morning is wet from overnight rain and the path still damp enough for snails. A slipping morning, a gliding morning. The wreckage from last night’s footsteps litters the pavement, the horrid crunch squelch as leather meets mollusc and the mollusc looses. Ants scavenge in the aftermath, valuable to them, moving it along the food chains; the evidence will be gone on my return. The bird song is the familiar mix of the native and the introduced. Blackbirds, Myna Birds, Britain and India in Australia. Wattle birds, real Australians, flash from bush to bush in search of nectar, driving off other males, fighting with anything that moves. Most savage on their own kind, but hardly less so with others. But the Blackbirds dominate and as I walk
Post a Comment
Read more

A weekend away - the other side of the hill. 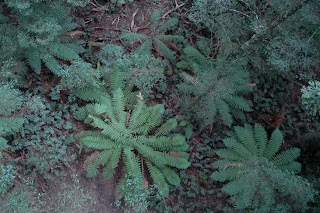 On Sunday we drove away from our island cottage back towards the town. From gravel roads to tarmac, from rural peace to a shopping strip. Cafes with coffee. Shops with tarot readings, crystal healing and “Native American Books” (whatever they are). The coffee appealed, the quackery did not. If I want quackery it needs to come with a sense of fun. So I went to the river to watch the ducks. Much better. Very calming. The world is improved by ducks. Leaving town took us up through thick eucalypt woodlands dense with undergrowth and scattered with houses, some charming, some surprising, some ugly. More islands surrounded by bush. The bush here is not untouched by any means. Logged over many years, but not destroyed, it retains most of its charm and much of its wildlife. A road side tree stump was evidence of former industry. The postbox slot cut into its base allowed a plank to by inserted, and on this a saw-man stood high above the trees flared buttresses. Bypassing the natural support,
2 comments
Read more
More posts