Showing posts from October, 2009
Show all 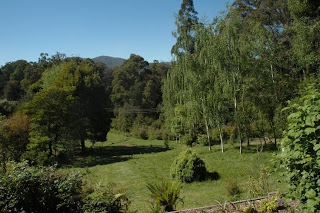 When you live in the city the dark never really is. Streetlights. Car headlights. Nightlights. They all make the dark less than dark and the night less than different. But drive away from this and the dark becomes real and the night becomes another world. The car headlight swept over a hazel hedge as we pulled into the cottage. A visitor from overseas, transplanted into another land. Just like me. Too late for catkins, too early for nuts – a mid-stage in life. Just like me. Torch light led us to the front door, where a bird awoken from its sleep decided to join us indoors. A Welcome Swallow indeed, although the limey gift on the floor was less polite! The night was full of darkness, stars and the calling of frogs. Less than an hour and a half and a whole world away from Melbourne. You could see the outlines of trees, smell the damp mud by the dam, taste the air, but detail was hidden – detail was a surprise waiting for morning. We awoke to a silence full of bird song and bright
2 comments
Read more 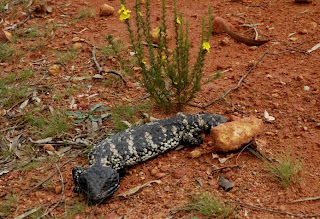 Many of the animals in the Grampians are a bit less subtle than the plants. They spring to your attention. Often literally. Or they sleep predictable sleeps at predictable locations, or they eat predictable meals at predictable marsupial restaurants. But apart from looking where you think they are going to be, one of the better ways to find the larger animals in the Grampians is to be going somewhere else. Just drive along and things will hop, slither, wander and generally meander out of the bush, across the road and off into the bush again. It’s wildlife and traffic hazards all over again. In about a 40 minute drive three Shingleback’s (or Stump-Tailed Lizards) ambled across the road. Even “amble” really seems a bit energetic for this lizard, taking at least a minute to move across the road. Of course it takes longer when you have a man with a camera and two small children peering at you. So during that 40 minutes we happened to be in the right place at the right time three times –
Post a Comment
Read more 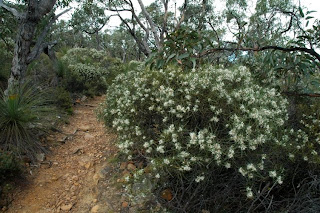 Driving in the Grampians in spring can be a tricky business. The risks are many: unmade roads, damp with unfamiliar rain, feel has if they are surfaced with finely engineered ball bearings, suicidal kangaroos, often accompanied by their equally depressed friends, hop into the road with remarkable frequency, flowers. It all adds up – loose surface, crazy marsupials, flowers. I don’t suppose that flowers make it on to the list of road hazards in many places, but here in the spring and especially after rain they most definitely are. Just as you are rounding a corner, tires only just keeping grip on the surface, you see a patch of orchids on the left hand side of the road. You lose concentration trying to get a better look, and all of a sudden the trees on the right hand side of the road are much closer than they should be. Panic. Brake. Swear. Regain control. Often not in that order. The Grampians are famous for their spring flowers and a good way to find them is to pull into the sid
1 comment
Read more 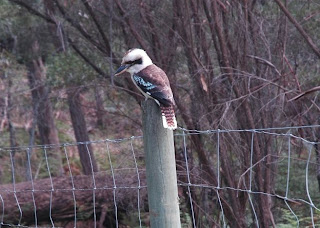 No matter where you are going, or how you plan to get there, you always pass through the same small town, although sometimes it’s a village or even a suburb. It’s called “If you have forgotten something it’s too late to turn back now”. It’s twinned with that other place called “Did you lock the back door?”, and both are vital locations on any journey. We had passed the “it’s too late to turn back” point at least an hour before when I realized I had left my binoculars in the study. In my own car this would have been no problem, but we were not in my car. I carry a pair of binoculars, hidden, Jason Bourne style, under the front seat for bird watching emergencies, for rarities on the by-pass, passage migrants on the journey home. “Oh dear!” to say the least. But it made me do something different, something not always to the fore. It made me listen. Now I always listen, who can stop? (Well my kids seem to be able to stop and start at will, but that’s a different issue!) But this seeme
1 comment
Read more 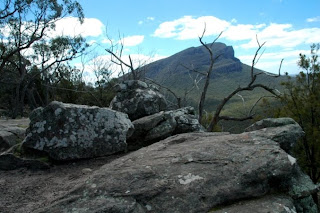 The Grampians sit West and North of Melbourne. A four hour journey by car, longer with kids, an eternity if they are bored, restless and fractious. Luckily eternity does not beckon. We drove in rain along the Western Highway, the road hiss of wet tires, the rhythmic swish flap of the wipers battled with the rhythms of the music – thankfully yours, not the soul destroying banality of the Wiggles or some such outrage. It was the day after the Grand Final; the gulls were missing this time, just Cats flags – deep in Geelong territory. Missing also were the legions of South Australians that had accompanied us in the past, returning home disappointed, no flag, just flagged spirits and hopes for next year. Rain, water on the roads, water in the fields (paddocks really) and water in the dams. Nothing unusual for most places in spring, but here it was a novelty. Ten years of drought has robbed the land of its water. Is it really just drought or is it the first real impact of climate change? All
Post a Comment
Read more 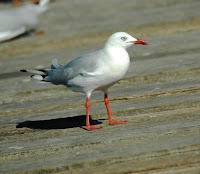 On the 19th September I was sat in the Melbourne Cricket Ground awaiting the start of a much anticipated Australian Rules Football (AFL) match, with the winner progressing to the Grand Final – The Holy Grail of AFL. The clash was between Geelong, the surprise losers in last year’s grand final and Collingwood. Winning would give Geelong the chance of sporting “redemption” after last year and Collingwood its first chance of the “flag” for a number of years. I was barracking for Geelong, not because I support them, but on a point of principal – they were playing Collingwood! The crowd grew strangely silent as the start of the game approached and as it started and the ball was bounced down the crowd roared, the air filled with conversations about …….. seagulls! While I have to concede that some of the crowd had a point and that there were a lot of birds about, I could not see a single seagull – all I could see were gulls, Silver Gulls to be precise. I can’t help it, but seagulls don’t ex
2 comments
Read more
More posts