At the waters edge (Part 2) 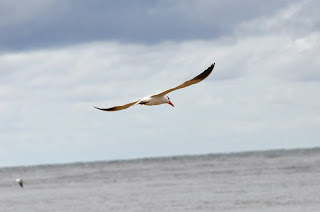 Down by the lighthouse, where the turning of the tide exposes rocks and weed, birds gather to look for food, to loaf about and to squabble over finds and food. Pacific Gulls, huge, muscular looking birds stand guard over fish frames and other delights. These gulls have the largest beak of any gull, and it looks a fearsome weapon, even through the protection of binoculars. One bird seems to have surprising difficulty with a toad fish, probably discarded by a fisherman. Even the huge beak seems not to be able to cut through the tough outer skin, and eventually the bird takes flight bearing its fishy find with it. Seaweed coats the rocks with tiny balls that look and feel like slimy, rubber marbles, each footstep is risky, and jumping out of the question.

I pick my way to the sea’s edge and look south towards distant Antarctica. I turn around and look north, towards even more distant Cape York in Queensland, and I am struck by the size of this continent island and the scale of the floods. The water rushes out of Port Phillip Bay bearing a brown tinge, brought by the rain, and the colour stretches out to sea. It’s still visible to the horizon, here on the last stretch of water before the Southern Ocean circles the globe. Just how much rain have we had?

Down at the water’s edge, where careful feet become even more cautious, are flocks of Red Necked Stint. Tiny birds, mouse-like really. At least one has an orange flag on its leg, showing that it has been banded on the coast of Victoria. There is a possibility (albeit a remote one) that I banded it! I still find it remarkable that these tiny birds - each one weights about 25g - can fly from their breeding grounds in the northern hemisphere to the south coast of Australia every year. When you hold them in your hands you can feel their hearts beating, frantic, tiny, like a failed attempt to tickle your palm. But they still fly the thousands of kilometres each year, driven by genetics, the turn of the Earth and the food they glean from the water’s edge.

The rain had swollen the Barwon and it rushed with unusual haste towards the sea. The upper reaches seem to have covered mud banks and rich feeding grounds that would have normally held flocks of waders. In search of food they head for the river mouth. This is not really a peaceful place. A new bridge is being built, with the clatter bang of machines and building. Joggers pound along the beach, reach the bridge, turn and come back, fisherman cast hopeful baits into the swollen river. And in the midst of this is a flock of about 100 Bar Tailed Godwits. They probe the sea edge or most uncharacteristically wander about on the beach. Normally these birds are very nervous, and getting within binocular range is a challenge. Here they were far more accommodating. They moved over the beach, looking for all the world like a flock of domestic birds, slightly agitated but tolerant of human contact. At the water’s edge were more Red Necked Stint and a small flock of Knot. They flashed about, slightly spooked by the passing people, but calm enough. A good game with stint is to try to find one that stands still - so far I have failed to find one.

Overhead terns call - and the harsher bark of a Caspian Tern makes me look up. These are a large and impressive bird, with an equally large and impressive red beak. I once heard them described as “large with a very large carrot stuck on their face” - in reality the phrase used to describe the size of the carrot was a little more Anglo Saxon than I have quoted, but you get the picture. The Crested Terns were as obliging as ever as they gathered with this year’s young, their mottled feathers in contrast to the smart grey and black of the adult. Then I noticed a much smaller tern, with a black beak and legs. Wow! A Common Tern, which despite its name is not really common here at all. This is the first time in a long time when the habitual scan through a flock of terns or gulls reveals anything out of the ordinary. The Caspians land on the beach and look huge. Another set of surprises from a place I thought I knew.

The sun was just brightening the morning sky and the full moon was still bright enough to cast soft shadows. There is something special about early mornings, a sense of opening. I was off to the beach, and I hoped it would be empty and was. Willie Wagtails argue on the roof of a beach house and Blue Wrens call. The sunrise is wonderful, but my cameras are on the kitchen table. Oops. The light slices through gaps in the clouds and plays hide and seek across the landscape. A successful Gannet, with a silver fish in its beak, flies past an unsuccessful fisherman. For a moment a pod of Dolphins break the surface of the bay, but they dash off and I don’t see them again. The beach traffic begins to build, with dog walkers and joggers. I head home.

The beach was beginning to fill with families, mums, dads and kids. The young learn from the old, and wisdom is passed on. A group of Pied Oystercatchers, possibly even a family, probe in the wave wash. One of the adults has coloured leg bands and a metal ring. He is a regular on the beach. One of the birds with him is a juvenile, with a dull beak rather than the adult’s flame red. Nice to see an example where the teenagers are not more outlandish than the adults. Beach worms are pulled, ever so gently, from the sand. Pull too hard and they snap, not hard enough and they don’t come out at all. I wonder how many times the juvenile snaps the worm before the task is mastered?

That night I am awoken by the calls of Yellow Tailed Black Cockatoos. I have never heard them at night before and I imagine what must have caused them to move from their roost at night. A fox? Humans? The rain? The next day they flap overhead as we have morning tea. They seem to fly in formation, and call as they go. Down on the beach more dragonflies flash past.

I have been here before, but the place still surprises me. Thankfully.
Posted by Stewart M at Thursday, January 27, 2011

I am always amazed how similar and how different your Oz sightings are from my NE Ohio sightings. As I was reading and seeing your photos of the Caspian Terns I thought about how rare a sight they are for me, I always see Common Terns. Then as I read on I was reminded that you are a world (well, half a world,) away. What's common here is not so there. Oh what a world !!

It's interesting to hear about the birds on your beach and how busy it is with people. Although you have similar birds down there I can go out kayaking in the morning and not see another person!

Hi Mick - the birds on this beach were a bit out of place - pushed off their normal feeding grounds by flood water. Normally a lot more nervous!

Thanks for sharing the link on your terns, Stewart. :)

Firstly, what a wonderful blog you have and charming tales you tell. I can seldom filch enough time to read anything lengthy but am glad to have found yours. Reading of someone else's joy in nature certainly takes one's mind off a few unpleasant hurdles.

I am a novice at sea birds so next weeks sojourn on the coast should be fun. I might need some help with identification if I am lucky enough to snap something interesting.

It is so nice to find someone blogging from a familiar area.
Thanks for your comment , and don't be a stranger.

PS I too go first for the camera and then for safety be it scorpion (2.5") or snake.

Thanks for the returned compliment.
You don't know what you are getting into . . . I will pester you for your expertise.

Great group of birds. We've had our own bout of flooding here in Oregon, US, but nothing compared to what you folks must have experienced- our was a lot more localized.