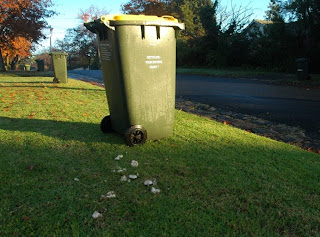 Some of these changes are most noticeable at either end of the day, in the mornings and evenings. Some may only be noticeable when the unemployment statistics are published or when you notice the size of your tax bill. Many things people seem not to notice at all.

It was cold on the way to work, breath in the air, hands in the pockets, chill on the legs. Breath in the air is a clear marker that things are on the move. I like the idea that you can see your own contribution to the water cycle. It seems to be vapour made visible - although it's not really that at all. When the morning brings fogs or mists you swim through a thin soup of water - condensation on the fine hairs of a woollen scarf, droplets of water in the junctions of leaves and stems, pooling liquid on car roofs and painted fence rails. On some mornings the water thickens to ice on the window of the car, ramping up like a wall at the edge of the wiper's sweep. Liquid, gas and solid, water's triple point of being. Each merging into the other, each moving through the roundabout of states.

Birds in the trees bring a rain of drops and a scatter of leaves. Bright sunshine will cut through the haze and burn off the mist, although it can linger in dips and hollows. It hangs in pockets by the rail lines, drifts in smoky fingers between close packed trees. On some early autumn mornings ponds and rivers smoke as they give up their water to the sky. I wonder how long it takes for the outward breath to become the inward drink? Do we ever meet the same molecules again as they flow round and round and round?

Some people say they would not drink recycled water - but what else do they think they are drinking? Up in the hills behind Melbourne I visited the fenced and protected catchments that trap our water. They cannot really be visited because they are fenced off from the public in fear of contamination and pollution. In many ways this works - Melbourne’s water is justly famous for its quality. It sits in stark contrast to that of London, or greater still Adelaide. But the catchments that rest behind the barbwire fences and locked gates are connected to the rest of the world by the cycle of water. The water that flows from my tap was once in the sea, once in the air, possibly once in the bladder of an otter, a kangaroo or a moose. Such things are inevitable. Can we keep pouring this resource down the drain, or flushing it away? Water can be used over and over again, so why only use it once?

Above the water of Sylvan reservoir, which was rather sylvan in outlook, swallows flew and hawked for insects, some flew low and cut their beaks briefly through the water - drinking. A bird called from a water tower and a heron stalked the damp edges - hunting. But I watched all this through a fence. More than anything else this seemed to say that this part of the world was elsewhere, that what it gives could not be obtained if humans were there. That the resources we need and places that provide them are separate from us. And in that separation lies dissconection and misunderstanding. “We should have just built more dams” a woman said. And I was tempted to ask “and how would we fill these dams if it no longer rains?” But I suppose arguments about resource management with relative strangers would be considered a little strange even if she started it! I felt like a coward as I let it pass, but it may have been for the best.

To be able to watch clouds from above is a rare treat. We study them from below, or walk through them if they join us at ground level. But to be above the clouds is truly to be high. The view from a plane's window opens up across a cloud prairie as far as the eye can see, but this view comes with many problems. Cramped legs, stiff back, plastic food, DVT and the fear that striking up a conversation with the person on the next seat will have you branded as a madman, a terrorist, or just out of touch with social norms.

But to walk through the cloud layer and to emerge into the sun bright landscape above is a rarer treat indeed. While the valley floor may be shrouded in a gray death shroud that robs the world of colour, the upper slopes can be bathed in light. Entering such a place is like coming upon a long sought for understanding, where sense and purpose come together and show you things you never knew before. Leaving the clouds allows you to see but not be seen, not from below at least. Such sights are rare, seeing what you see rather than what we have been told to see. We need to look like this more often. 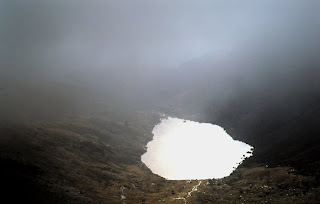 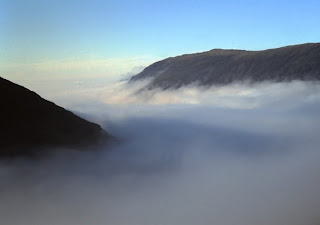 Behind the play park, away from the calls of children fighting for access to the monkey bars, there was a nature trail. Often such things are disappointing, with interpretive signs telling you what to notice, causing you only to look at what has already been noticed. Here it was different. If there was any information provided I missed it - but there were numbered posts. A 3 lurking by the side of the path for reasons that were neither plain nor explained. It became a good game to try to work out why the sign was there - what were we supposed to be seeing? Yet the numbered trail did not stop the kids from finding other things - under bushes, growing from trees, hidden.

As we walked into the trail, from open amenity grasslands to woodlands the temperature fell, and as we walked into the gully bottom that the trail followed it fell even more. Eventually it became cool enough for our breath to show again. It was a return to the chill of early morning. Under the shadow of the dam that formed the reservoir we could see that we were pushing water into the air. Would it drift over the dam wall to be trapped by its liquid form and brought back to Melbourne? Would it drift away from the dam and over the sea, next passing through a living thing in Mexico or Madrid or Moscow? This great cycle of water - the endless recycling of atoms - can be traced back into deep time, all the way back to time zero and a very large bang if you try hard enough. It seems remarkable to breathe out materials that have been present since the dawn of time, atoms that have tracked through all the stages of history. Atoms that can only be broken - split - by the violence of human ingenuity.

Water was not the only thing on the move. Under trees, in the grass, hanging from trees and growing from wooden seats abundant - often impressive - fungi grew. If water is recycled through the action of temperature and pressure, then many other atoms are brought back to into use by the action of fungi. Large things, complex things, insoluble things rain down from life - wastes, excess growth, junk caused by wear and tear. This rain would stay in that form for a long time indeed without the action of fungi. The often slimy and occasionally smelly process of decomposition breaks this rain of material back into small, simple and soluble materials that can be reused - over and over again. Recycling was not the invention of hirsute greenies in the 1960’s, it's been going on for ever. It built me, you and the cat next door. I get my kids to breathe on the tomatoes in the garden - get the carbon dioxide moving around!

Fungi really do seem to have a bad name. Toadstools. Poisonous. Danger - don’t go near. It seems that the belief in miasmas still haunts fungi - if you even walk past a toxic one you will drop dead! Never mind the fact that the atoms we are built with have been recycled by mushrooms and their allies.

As I said a while ago I think fungi confuse people - their appearance too rapid for them to be plants, too rooted to be animals. Some kind of hybrid thing, built for confusion. Autumn is the prime time for them - thriving in the cooler damp conditions - neither fried nor drowned.

Under the pine trees in the damp cool shade mushrooms grew. Large ones, one with red spots. Classic fairy tale mushrooms. We may not meet the elves or unicorns of legend, but these mushrooms are plucked straight from the pages of myth. A lady with an eastern European accent told me not to eat them - and to avoid the “yellow stainers” further up the slope. Reasonable advice by the sound of it. The classic mushrooms are Fly Agarics, and they may be no more native to Australia than the rabbit or cane toad. These ‘shrooms are alien in every way.

Out on the nature strip the fungi produce another story book classic - the fairy ring. Although this one is truncated by a tarmac edge. A classic rural event, sliced off by urban sprawl - only this time it's just on a small scale in my garden, not nibbling away out the edges of the habitats that remain. Growing out from the single point of origin they become circles as they grow older. They seem more than suitable for small people to dance within. And my kids do.
Water, carbon, oxygen, stuff - round and round, again and again. Natural cycles that process our limited matter. Without ‘shrooms and clouds nature's clock would have run down years ago.

Great pictures Stewart.
Are you planning a story on the 'pooing' stick animal..last seen under the ledge out front at your house?

hey mr munkton, we got our midyear biology exams results back, and the class did better than we expected, and because the exam was mostly interprative and not very fact driven. So joey and i recon it was probably the general biology problem solving and logic we picked up from you last year that helped us during the exam, so thanks for teaching me good last year.