Much can be learned from a single phrase. When a person says “Did you see the report in the paper?” it is clear they assume you know which paper they mean. They mean their paper, the paper they read. And if they ask you about “the paper” they assume you read the same one they do. In this way much can be learned.
Much can also be hidden in a single phrase. Many truths can be obscured, many understandings prevented.
“Garden Variety” is such a phrase. It means ordinary, humdrum, unremarkable. We get birds in the garden – this in itself is unremarkable – so we get a variety of garden birds. But are they always Garden Variety birds? I think not. To view our garden birds as ordinary, humdrum and unremarkable is to miss the point. It cloaks those birds in a veil, a veil that needs to be lifted.
Many garden birds are common in the extreme, they may seen banal because of familiarity. They are never noticed because they are always seen. They are the garden constants. Some birds are noticed because of their size, or because of the size of their beaks. Some birds are noticed because they nest where we live. Hiding in plain sight, at the top of post, in woodshed corners, famously in old kettles and abandoned hats. Such birds bring variety to the garden and should not be dismissed as garden variety at all. I have some in my garden as I write.
When I arrived in Australia Butcher Birds had an air of mystery to them.

They were birds that occurred elsewhere, and if you knew of one on your patch you would definitely go and see it. Vlad the Impaler had nothing on a shrikes – which are butcher birds. Insects, small reptiles and such like lined up on a thorny branch. Impaled on a Butcher’s spike. Air dried lizard anybody? (Any South Africans reading this will probably be say “and you point is?” Nothing like air dried wildebeest as a mid-morning snack!)
The first time I saw Grey Butcher bird in the garden I nearly fell over. In my garden? No, it can’t be. But it was. I have since come to know that they are rather more common than I expected. But they will never be a Garden Variety bird as far as I am concerned. They breed in the mature trees behind my house and the noisy young beg for food on post, the edge of our sand pit and on the tomato frames. They are not fussy, but they are hungry.
The call (which for a while I thought was a magpie) is a bubbly (I just heard one!) warble. “Loud, mellow and piping” it says in the book and that just about sums it up. Nearly constant would also help. Its habits include “margins of rains forests, monsoon forest and gardens”. OK, so a few other places are listed before gardens, but it makes a nice list of three! They fight, squabble, get harassed by the Wattle Birds and bring a wildness to the garden that I like. Rainforest (how exotic), monsoon forest (they must be good mustn’t they) and my garden!
It will come as no surprise to learn that Grey Butcher birds have a lot of grey on them. Over the back, the tops of the wings and in a lighter shade of pale, down the front. Their beak is hooked and looks ready to wound. They are a muscular but slightly drawn out bird, a

blackbird on steroids. And (and I acknowledge I’ve said this before!) they live in my garden! The young are obliging in the way that they sit and call, they invite observation. The adults are less so. They have the flighty caution of all predators, a willful unwillingness to be photographed. They call, hidden, from tree tops or explode, startled from garden edges. The adults do not pose. A double flap and glide is common in their flight, from garden fence to washing line and off into someone else domain. I seldom if ever see them catch anything, but the young are growing, so they must do. I have the strange feeling that it is the birds that own this patch of Australia, regardless of what the paperwork says.
On the other side of the world where it is still yesterday and the tree push hard against the roads it will be winter. Leafless woodlands creep into the back blocks of people’s houses. Snow banks against the windows, raccoons leave footprints and birds come to the welcoming feeders.
These are garden birds as well, but one has a special pulling power. I had seen it before, ripping a tree stump to pieces in a New England woodland. Laughing with pleasure at the sight of a chicken sized woodpecker with a red crest. Pileated Woodpecker. The light was failing but it was good enough to see this bird. Less than 30 seconds later it was gone, strong irregular wing beats taking it away, out into the growing darkness and gone. That was no Garden Variety bird!
When I found out that they actually visited my friend’s garden I lapsed int

o jealous shock. Woodpeckers are rather special to me. They speak of woodlands, childhood and special places. Nests found in holes, yaffles on ant rich pastures, Great Spotted’s on the feeders. Three species, one only ever seen twice by me, both times glimpsed. Always a welcome sight, regardless of species. Some seem have become more common in the UK in my absence, their call distinct, their dipping flight characteristic. But for me, here, now, they are absent. For the time being I have lost them.
I live east of the Wallace line, and beyond it there are no woodpeckers. There are many other wonderful things, but there are no woodpeckers. And I miss them. The Wallace line slices down between Bali and Lombok in Indonesia and cuts off Asia from Australasia. A line between bio-regions named for a man who could have been more famous but for the tyranny of distance and work of other people. Maybe it’s for the best – Wallaceism is so much harder on the tongue than Darwinism!
Ohio is to the west of the Wallace line and has woodpeckers – large black ones that come to visit your garden and impress your guests. And I have to assure you Rich, it worked!
Garden birds should not be over looked. The live close by and we should embrace them, not lumber them with some disrespectful name!

RBenz said…
We have this discussion often. Your parrots and my woodpeckers. It is truly a tossup. My wife Betsy and I were hiking along a snow-covered path the other day. There it was the distinct sound of 'rat-a-tat-tat.' a big old tree was making the sound that echoed throughout the forest. The Red-bellied Woodpecker that flew from behind it reminded me of our hikes through Holden Arboretum a few years back. And of your flock of parrots swarming across the Australian sky when we visited that side of the Wallace Line. Thank goodness for both! And for a friendship that connects them from time-to-time. RB
December 25, 2009 at 1:31 AM

Unknown said…
Just to add an English perspective - i get the occaisional Great Spotted Woodpecker in our garden - and even though they aren't terribly rare I always thinks it's a privilege. I also get tree sparrows. For those from further south - tree sparrows look like house sparrows (the garden variety) to the untrained eye. But if you watch them closely they're more dainty, the males and the females look the same, they have brown head patches not grey and nice black cheek patches. In large parts of even a small country like England they're as rare as hens teeth, but in my garden they one of two Garden Varieties of sparrow. So I have to agree - Garden varieties deserve more respect - because they're usually special in their own right.
December 26, 2009 at 4:55 AM

petersteel said…
i found your article good for understanding the importance of bird control.i really need the repellers and spikes to get away these birds from my fields..
January 31, 2010 at 3:25 PM 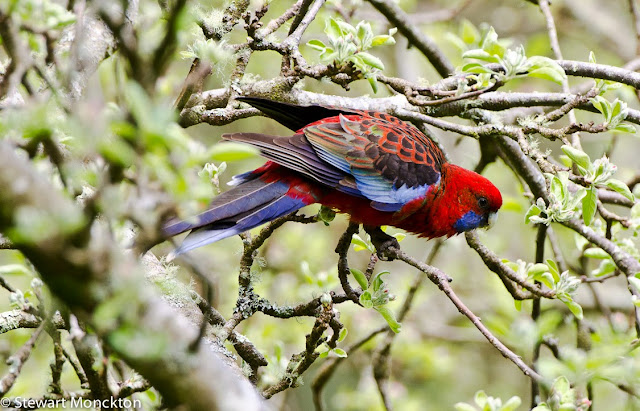