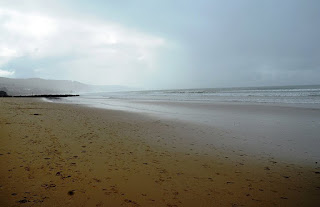 In England a young woman began a role which at her birth she would never have thought to be her destiny. The politics of tradition had prevented her uncle from being King, and her father had taken on the mantle. On his death the crown passed to her. Sixty years later she is still queen.

In Australia, probably after heavy rain, there was a landslide in a wooded valley. Trees fell and tonnes of soil moved, although I doubt anybody heard it. A small stream was blocked and the valley behind the slide began to fill with water. The valley side moved to the floor and a lake was born. Later, in a sign that Australia looked to the north rather than the region, the lake was christened Lake Elizabeth. Sixty years later it’s still there.

Lake Elizabeth lies within the Otways, a region of cool damp woodland, heavy rain and pure air. A region of small, surprising mists, of lichen and banks of moss, silver tipped with drops of water. Unimaginatively, but appropriately, the nearest settlement to the lake is called Forrest. We had planned to visit Lake Elizabeth on the long weekend used to celebrate the other Elizabeth’s birthday. But rain falls on all kinds of plans - it shows no preference for royalty or us common folk. It falls on those destined by the accident of birth to live in palaces and castles. It falls on those whose destiny is much more of their own making and whose accommodation is far less grand.

The rain over the last few weeks had fallen with the kind of temperate ferocity that probably mirrored the rain of 60 years earlier. In the valley near Forrest there were no landslides, but the river in the valley rose and rose until it broke its banks and covered the paths and steps that lead to the lake. The camp site flooded and the walk ways over the river were now under the river. According to the information we had you could not get to Lake Elizabeth. Especially not if you had kids in tow. This was a huge disappointment as we had hoped to watch that quiet Australian the platypus there. The weekend away had been based upon the idea that we would go to the Lake and watch until the sun when down. It would be fair to say we did not really have a Plan B.

Our base for the weekend was Lorne, a town that suffers from the seasonal schizophrenia of crowded summer madness and lonely winter solitude. I have come to prefer solitude over madness. Our path to Lorne took us along The Great Ocean Road, a winding strip of bitumen built in memory of the dead from the Great War and to provide work during the great depression of the 1930s. Now these curves are loved by motorcycle riders and loathed by tourists confused about which side of the road they should drive on, and missing the straight and wide freeways of home. In the madness of summer the road becomes a car park as the number of tourists grows and travel times stretch towards the too long. The free spirit bikers go elsewhere.

Whether you love or loathe the road you cannot help but be impressed by the views. The road follows the contours of the land in a plastic, flowing fashion. It overcomes the difficulty of steeping terrain by going around and avoiding. When it encounters the many rivers and creeks that flow down from the hills to the sea it runs inland. It flows out to the very points of the hilly spurs that push the land towards the sea and only cuts off a small seaward slice of land. It is on these parts of the road, with steep rock to one side and dragon’s teeth on the other, that you least want to meet a bike or a befuzzled tourist, especially if they are on your side of the road. Unfortunately such things still seem to happen with monotonous regularity. Despite its Accident Blackspot reputation, when you drive this road you know it was laid out in a way that was in tune with the lay of the land. The accidents are as much a product of human overconfidence and confusion as they are the flow of the road. It may not offer the landscape much respect, but it does not brutalise it in the same way that straight roads do – the knife cuts from A to B that bypass the interesting, the old and the indirect. This is a classic road on which to make “good time” in the Robert Pirsig sense of the word – a time which is good, rather than a time that is short. You really can make good time on the road to Lorne and still arrive late.

The road pushes up a slight hill and then the view opens out over Loutit Bay. In the slight crescent moon curve of the shore sits Lorne. Over on the far side of the bay a pier runs out to sea. Even in the poor light of a light rain you can see the fishermen lined up, lines out. The front street of Lorne has almost absolute beach front position. A belt of grass splits the beach from the road and the views are mostly uninterrupted. The wonderfully named Lorne Bowls club sits near the sea, and the smell from Andrew’s Chicken shop (where according to local information and inside gossip, the best chips in Lorne are served) fills the air with a mouth watering aroma.

We pull up outside the house, look around and then look upwards. Each house in this little road steps up the steep hill away from the road. Each house seems to have been built on many levels, sitting on strong stilts or deep, reinforced platforms. Huge footprints cut into the hillside as if a heavy footed giant had strode up the hill and away into the forests. The engineering is often more note worthy than the architecture. The concrete and steel hold the hillside together, so that in heavy rain or baking drought the houses do not follow the pull of gravity and walk down the hill.

All around are bird calls and the sounds of wings. Kookaburras laugh at us from the tall trees, sulphur-crested cockatoos screech and currawongs call and bounce from tree top to tree top. A small pool of water at the road’s edge is home to a flock of Wood Duck who chatter in a nervous quiet fashion as we unpack the car. One of the first things we see inside the house is a notice asking in a tone that made it plain we were being told rather than asked to not feed the birds. The birds sit on the rail of the balcony and look inside, seemingly imploring us the break the rules. I don’t, but the birds persist in begging. I photograph them, and get closer to King Parrots and Kookaburras than normal, and I end up knowing that while they may be wild in a technical sense, they are probably not fully birds of the deep wilderness. We settle in, go for a walk along the pier and watch the sky briefly flare. The day ends with fish and chips and the smell of salt air, wood smoke and red wine. Sleep is not difficult to find.

We wake to the rattle of rain on the windows and the continuing call of the birds. A Yellow Robin briefly visits and we pull on coats and head for the beach.

The white noise of waves and wind drowns out the calls of the gulls floating on the sea breezes, the barks of beach freed dogs and the voices of kids running and chasing. Round and round they go, winding down from the weeks of school by winding themselves up on the beach. Sharp angle turns that kick up sand and head down lead long sprints to finishing lines heel scratched into the sand. A dog slides through the drier sand at the top of the beach and pounds with rocket speed and ruler straightness towards a distant gull. Even when the bird takes to the air and gains mastery of the situation the dog does not give up. It jumps with a futile, boundless energy at the bird, which slowly drifts away to land just out of harm’s way. Thirty seconds later the process starts all over again. A cloud full sky, heavy with threatened rain, sits low over the sea. A few showers chase along the beach. The dog stands at the water’s edge and barks at the surfers slowly turning blue in the waves. I turn up my collar and wish I had a hat. The kids keep running and running and running.

We all hear the call of the rocks at the end of the beach. They are too tempting not to explore. We find star fish and sea anemones, crab claws and strange honeycomb rock. Some rocks flare red as oxygen and iron rust away. Domes of rock – which I later discover are called Cannon Ball Accretions – stand proud of the beach. H tries to fly. And although he does make some fleeting upward movement, he fails. A Little Pied Cormorant sits on the rocks and in its nervous state does something that sounds very similar, but looks much worse. In the background a Willie Wagtail tries to crash the party. The waves break and break and break and slowly the clouds lift.

We go to check if we can get to Lake Elizabeth. We can’t. But we find somewhere else. Clearly unused to seeing two young children almost reduced to tears by the lack of platypus, the lady at the tourist information station leans forward, and in a secret, conspiratorial way says “You could try Allen Reservoir”. 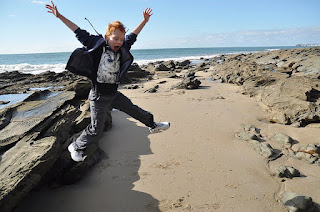 The photos are beautiful!

Really enjoyed reading about your trip. The story behind Lake Elizabeth was fascinating. Hope you get to see it before too long. Love H in midflight - great photo.

Stewart..I poured a cup of coffee and just sat and enjoyed your good read..and that is exactly how you write..making a good read...Thank you for linking up to Nature Notes...Michelle

Sometimes what we find by accident is even better than what we planned. Actually, in my case I'd say the accidental is more often better!!!

That's really wonderful writing. You made me feel like I'd been there too. Thanks!

Coloring Outside the Lines said...

I agree about the solitude- it is tough to enjoy beauty with a crowd of tourists. Your pictures are gorgeous.

Great and interesting post.
Beautiful photos.
Thanks for sharing.
Mette

I read these posts twice at least...once to enjoy the great writing and again to look at the pictures along with the words and pretend that I'm on the trip with you. Very interesting story (and not quite what I expected from the title -- but MUCH better!!!)....

Again, a great combination of words and photos! Nice post!