A butterfly with a bright orange patches lands on the damp sand of a beach. Its wing is broken.

The food in the cafe is good, the coffee excellent.  I’m forced to listen to the atonal snobbery of jazz.

I have little or no control over any of these things.  They are the way they are because of accident, design or probability; I can alter none of them. 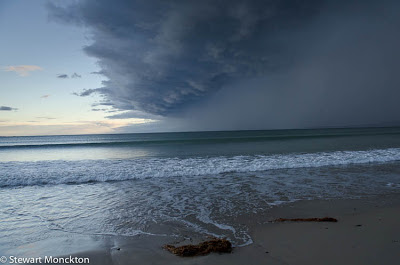 I don’t really know where this idea came from, that things should always go to plan, that things should always be perfect, but it’s widespread and damaging.  The butterfly was beautiful, the company good, the weather passing. But each one caused an internal sigh of disappointment that the experience was less than perfect, that all the plans had come to nothing.  I also don’t know where this next idea came from – possibly my Zen karate brother – but I rather like it: Walking in the rain only becomes a problem if you believe that you are going to stay dry in the first place.  If dampness is acknowledged as a fact of life, you may as well rage against the waves of the sea as worry about getting wet.  OK, I know that in some places the difference between life and death can turn on your ability to stay dry, but I’m not half way up K2 or plodding, unsupported, through the icy wastes of Antarctica.  And of course I’d rather be dry than wet, but do damp shoulders or, horror of  horrors, wet underpants, really matter if a walk in the rain brings you to places of wonder, beauty and revealed mystery?  More often than not I’m on a made footpath, normally no more than an hour or two from the car, warmth, a tumble drier and the prospect of a glass of wine in the evening.  Under these circumstances, why should I worry about a little water? Or let it spoil the day?  Why should a butterfly of remarkable, simple, beauty be a disappointment because it has seen a little wear and tear? I don’t think it should.  So, I try to appreciate the beauty of imperfection, I try to ignore the sounds of jazz.  But above all else, I walk in the rain. 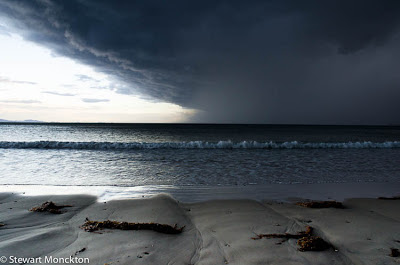 I am of the age where I no longer have a protective thatch on the top of my head, so I wear a hat.  The outside pockets of most of my bags contain plastic bags – simple rain guards for cameras, lenses and binoculars.  And yes I do wear a coat that makes flamboyant claims for its waterproofness, but deep down I have long since stopped believing that they really work all that well. And thus armoured I walk in the rain. 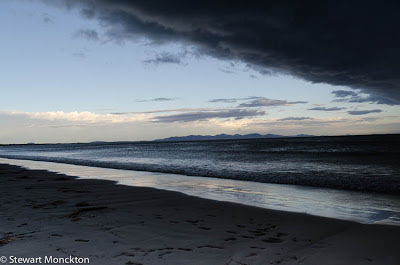 Waratah Bay is a beach village cul de sac by the sea. The road in is the road out - it’s not a place you would find by accident. The scattered houses walk back up the gentle slope away from the sea.  With careful design most houses could have a sea view.  Wave music drifts from the beach to fill the air and compete with (or complement)  the calls of the parrots and bush bound birds.  I choose to ignore the sound of the rain on the car roof, the swish flap of the wipers. 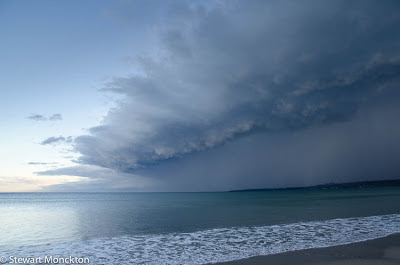 Settling in to a new house is always a challenge to your state of relaxation.  We played a number of well known party games; “Hunt The Mains Power Switch”, “Where’s My Hot Water” and finally “Pin The Blame On The Owner”.  We invent a new game called “Let’s chew the firewood into small enough pieces to use because there is no axe” – although I feel this game is destined to remain an obscure, family speciality.  As ever a holiday house starts to feel more homely as the kettle sings. The fire crackle catches in the hearth.  We pour tea and think about going for a walk.

Wave noises still come from the beach.  The hiss of rolling waves and the deeper, more muscular, crump of them breaking on the sand.  Sea-spray salt-smoke clouds back from the wave tops, pushed out to sea by the same wind that strikes our backs.  Waiting Silver Gulls huddle on the high tide strand line, sheltered by the small sand cliff at the back of the beach.  Occasional wing flicks and squawked comments ripple through the flock.  A running beach dog flushes them.  The sky fills with an energy and silver movement which pulls our eyes towards the far horizon. Away from the land, over the sea and towards each and everyone’s dreams of flight. 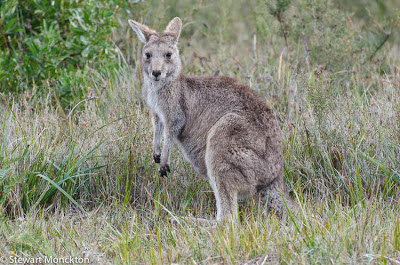 A bank of cloud, swirling grey, insubstantial, but massive, is moving though the sky.  Now and then lightning flashes through the cloud making a mockery of its internal darkness. Thunder rumbles over then beach many seconds after the flicker flash; the heart of the storm is far away, but we are about to come under its edge.  The sky is split into two-tone blue and grey; look one way along the beach it’s blue, spin round to look the other and it’s grey.  It’s only when you stop half way through the turn and look out to sea that you can see both skies at once.  It’s a division between the promise of spring and a reminder that winter has yet to pass. The wind cools and grows stronger, it smells of rain and energy. Its starts raining like a tap being turned on.  Heavy drops crash into the dry beach forming mini craters.  Here and there sand debris kicks up from the splash sites, the beach seems to buzz, its surface moving in short sharp jumps. The silver gulls land and huddle close to the ground, the rain falls heavier and harder.  We turn up collars, tug on hat brims and wonder about the wisdom of our actions.  We face the fact they we are going to get wet.  Grey clouds cover the sky overhead, a false dusk falls. Our walk home becomes the collateral damage of the pressure war being waged overhead.  Damp-footed we walk back to the house to see if the fire is still burning. 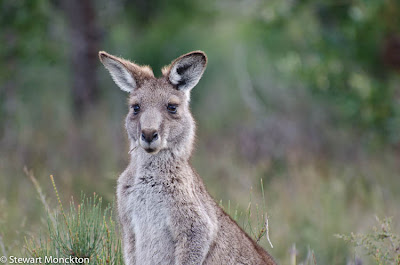 A rainbow gathers light to itself and passes it back to the world.  Cape Barren geese graze in the grassland, grey and distant.  A fox, bright eyed in the headlights, pauses as it runs from edge to hedge. The fragment scraps of evening flutter through the last light of day as heavy clouds blanket the stars to sleep.

We head out the next day under a patchwork sky with small scraps of blue – not enough to make a pair of sailor’s trousers as my mother would have said in a lore wise predication of rain.  It’s time to show my visiting family The Prom. I’ve given it a deserved build up on account of its beauty and its abundant wildlife; I’ve down played its location on the flanks of the southern ocean, with its capacity for wild winds and soaking rain.  I’m beginning to think this duality of emphasis may have been foolish.

Even the damp of a recent shower does not hold down the dust as we head down a side road towards Millers Landing – this is a favourite side trip from the main road; a “D-tour” as my kids call them. The visitors from the placental part of the world are not disappointed by the marsupials.  Kangaroos graze with a kind of nonchalance by the side of the road, confident that a few bounces will take them away from us and into the safety of the bushes.  A wombat, displaying more fear than confidence, dashes across the road.  At the moment of shutter release it hides behind the wing mirror of the car and heads, unphotographed, into the bushes that the kangaroos reject. 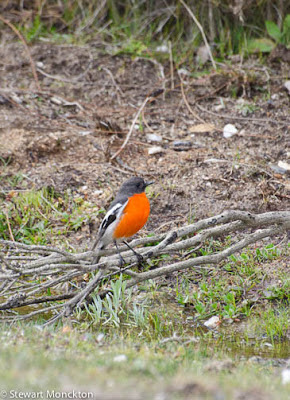 Flame Robins, bright red, buoyant and flighty, flee before the noise of the car.  Twenty metre flights from fear to safety, always just not close enough.  Through binoculars they live up to their name, with their chest feathers flaring brighter than the ground around them.  For once reality is matching the advertising – that is if you ignore the rain. 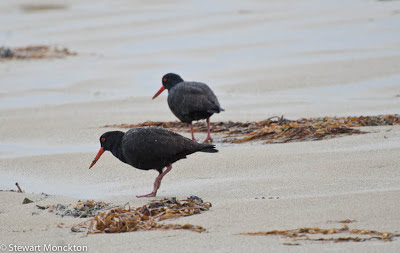 Sharp winds push equally sharp sand along the beach.  Sometimes it sneaks between boot top and trouser cuff and stings an exposed ankle.  Clouds of sand ghost through, falling where the wind fails, travelling onwards where it touches. The robins are here too, along with rain speckled oyster catchers and flights of distant gulls and terns.  It’s not picture book perfect, but it is real.
------ 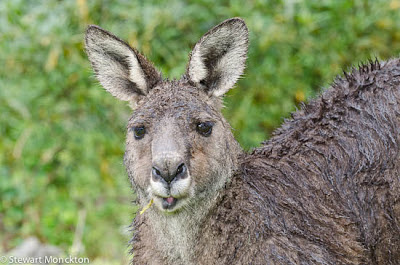 First light brings the unfamiliar, unwelcome, crisp chill of a half empty bed. There is little comfort in the mean, biscuit thin, duvet.  Behind my head, outside the curtain, water drips splash with metronomic regularity on the window ledge. The perfect product of steady rainfall and gravity ticks away the time.  Within seconds I can count the rhythm in my head. 4/4 maybe?   A windless morning leaves the world silent, save for the water clock outside my window.  Any movement pushes the errant arm or leg into a new region of cold; the probability of extra morning sleep falls.  The kids arrive and it reaches zero: but the temperature improves.

Outside damp kangaroos graze on wet grass.  Their fur is matted into thick fibres, but the rain sheds from the coat in silver slivers.  Drips form on the tips of their ears, producing rapid head-shakes which rid them of the irritation. One has lopsided ears that give a comical, resigned look. He stops eating and watches me and seems to be asking “why are you walking in the rain?” and I have to say I don’t have an answer I think he would understand. 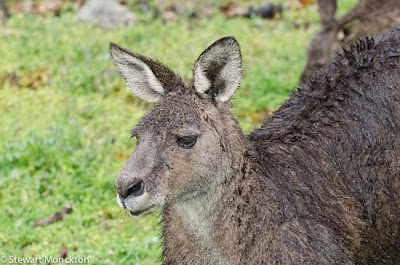