After the Gold Rush 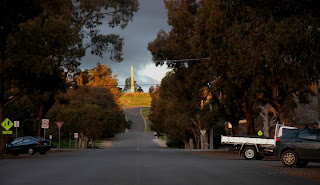 Arriving anywhere at night is a double edged sword. A combination of excitement and frustration. After a remarkably simple drive north we arrived at Castlemaine, in the dark and eager for dinner. Arriving in a planned town has considerable advantages, especially if you have no idea where you are really going. You come to appreciate the elegant simplicity of the grid layout, where mistakes can be rectified by turning left (or right!) and repeating the action until you return to square one. Such planning may exclude the romance of country lanes, but it aids navigation. Arriving almost anywhere in the UK results in you being sucked into some arcane one way system that uses roads laid out in the stone age for the benefit of cattle drovers and devised by people who take public transport to work because the roads are so bad. We were never lost in Castlemaine, because three left turns would bring you back to where we started from. Three left turns in Chilcompton or worse still, Kendal, and you would be headed for a different county, or possibly Wales, Scotland or an increasingly narrow track destined for the ocean. What straight roads lack in charm and photogenic plasticity they make up for in practicality. So, after a few loops of Castlemaine, we found our accommodation. Blood pressure returning to the normal range we ordered a beer or two. Ah. Some dark brew with a rabbit on it from Healesville. Splendid.

The upside of arriving at night is the surprise of dawn, or, as my children did not bounce in to greet me in the half light of the waking day, the surprise of late morning. Bright sunshine flooded a room otherwise filled with heavy French furniture and slightly teacherly notes about wet clothes on beds and not retuning the TV. The view from the window suggests that Castlemaine sits in a bowl as the horizon was ringed with trees. The surprise of clear distance, a very different view from the back fences and streetlights of home.

Parrots nipped off the buds of the birch tree outside the window, male blackbirds flew in noisy battles around the roof tops and garden edges, the females watching from carefully selected vantage points, checking, awarding points for style, composition and technical difficulty. Are the males aware of this selection pressure? Are they really only feathered automatons? In the roof edge gutters House Sparrows squabbled and called, spooking at shadows, some sparrow sense tuned in to things we cannot know - maybe fleeing from fear itself. Ravens beat steady paths across the sky - crow flying - to the wooded horizon. Magpies swirled in combative circles, with frantic wing beats and from the distance floated calls of Corellas, which sometimes flash white against the clearing sky. A surprising roll call from a second storey window.

Daylight allowed Castlemaine to show another face. At night the grid of streets had been simply convenient, now the straight streets' sharp corners allowed us to see the town in long views. The buildings seemed strangely grand for what is really just a small country town. Deep shaded balconies ringed the upper floors of many buildings and a number of shops seemed overly grand. Castlemaine is a town with a past, and that past ran with gold. The hills, creeks and quartz veins that surround the town once supported a gold rush of world scale. Gold fever expanded the town and the revenue paid for the grand buildings.

Now many of them are falling into a gentle form of decline. Old paint flakes from the walls and the detail of the buildings speaks of a time when money was of no object and all that really mattered was than the job was done properly. Some of the buildings have seen better days. The Imperial Hotel may have been grand back in the days of empire, but now it has fallen on hard times. Even the sign for the licensed second-hand merchant has almost fallen from the door. But all around these fading buildings there are signs of rebirth. Castlemaine draws in tourists and visitors - people like me - as it once drew in diggers. Now the gold standard is a good coffee and fine food rather than a productive mineral claim.

During the life of these fields enough gold was won from the ground to run the “War on Terror” for a month. This is not meant to suggest that this was a small amount of gold, for that is not the case. The rivers of money that built substantial towns like Castlemaine and Bendigo now flow elsewhere, and I suspect that the legacy of that money may be less long lived. Like many other Australian towns Castlemaine was asked to give up its young men to a foreign war - just as small country towns and wounded communities are doing today for another war. Outside the RSL you can see the memorials and spoils. Artillery pieces from both world wars, and smaller plaques to the savage little wars of peace. The spoils - German guns from WWI were placed away from the main street, while the decommissioned Australian guns from WWII were front and centre. Only a few years separated these wars, these guns, and it is frightening to think that under slightly different circumstances they would have been aiming at each other. Soldiers from small towns with names largely ignored by the sweep of history intent on destruction. With a sun bright sky overhead it really is hard to comprehend what these guns actually mean, what they were actually built for.

In the afternoon we headed for Bendigo, another gold town, but with a mining industry that is still alive. The economics of gold mining here are balanced on a very fine edge. Gold prices fall and the mines are in trouble. In the past gold was won with such abundance and such relative ease that huge fortunes were made. Bendigo is Castlemaine’s big brother, but they share a liking for flamboyant buildings and symbols. In the middle of town Queen Victoria looks down on the passing crowd and behind her the spire of a church marks the horizon. Here in country Australia we have a vista dominated by church and state, both looking back to the other side of the world. The buildings have lions and fine detail, and without any surprise, there is a large war memorial.
There was an exhibition in Bendigo of paintings by McCubbin, one of a group of Australian impressionist painters who were amongst the first artists to see Australia for what it was. It was remarkable for two reasons. Firstly the pictures themselves were wonderful, full of real colour and distance. They looked like Australia. Prior to these paintings Australian landscapes had looked like England, but with gum trees. This group of artists looked and saw in a different way to those who were before them. I suppose you could say that they paid closer attention to what they were seeing than to what they had been taught. That does not seem a bad idea!

The second remarkable thing about the exhibition was that it was in Bendigo’s own art gallery. These paintings were nationally important works and here they were in a smallish regional town in a gallery that would have been the envy of many larger European cities. You could almost hear the old gold shovels digging inside the building - it was not built by gold, but it was built because of gold.
By the side of the road between Castlemaine and Bendigo there were large boulders, heaped up or displayed. By one of the junctions they were arranged in a rough circle. They seemed to suggest the old stones that dot the landscape of Europe - menhirs and such like. But why do that? It makes no sense. Why not pay attention to the bones of our own landscape, rather than make it like another one. This is what McCubbin was doing, but it seems that not everybody has noticed.

That evening the setting sun put on a display that was fitting for a town of gold, and the old buildings of Castlemaine looked new again in the evening light. Former banks, old shops, weathered brickwork and window frames glowed once more. Along a long street the sun picked out a memorial to past glory and death and then the sun passed. Another gold rush over in a gold rush town. 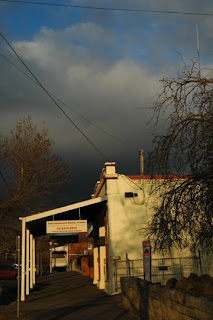 Very nice post.
It makes me want to visit Bendigo, maybe even check out 'Sovereign Hill'...
More of this, less of the spiders!

I've just discovered these posts, Stewart, via friendreunited, and I'm really enjoying them.